The Pulsars and Profiteroles Project
As you can probably tell, my research focuses on ~*PULSARS*~! Pulsars are the dense cores of deceased stars (big star runs out of fuel, goes BOOM (supernova), and bam you have a pulsar. These cores are some of the most extreme objects in the universe; they're like taking something the mass of the Sun (which is ~99.999% the mass of our entire Solar System), crushing it into the size of Manhattan (or any small city), and spinning it as fast as a blender. These stars give off radio waves and cross our sightline like a lighthouse (see image below). Pulsars are incredibly stable clocks and rival atomic clocks in terms of precision. They can be used for all kind of things, from navigation to searching for ripples in the fabric of spacetime. Pulsars themselves can just be very fun to study themselves because they do weird things, like stop emitting for a few (or more) pulses! 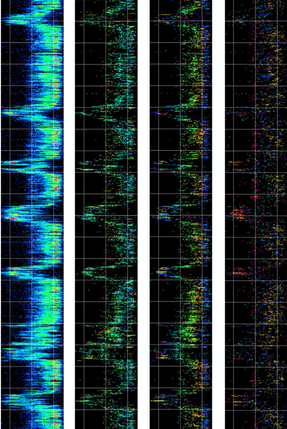 Image credit: Wahl et al. 2016
The first research project I was ever involved in, which I started my second year of undergrad, involves pulsar swooshes! In a paper by my undergraduate advisor, the amazing Joanna Rankin, and colleagues, two pulsars (B0919+06 and B1859+07) exhibited strange emission shifts where their lighthouse beams would come a little bit earlier than expected sometimes. This, deemed "pulsar swooshing," has only been seen in these two pulsars and after trying to come at it from a few angles such as "could this be an emission phenomenon" and "could this be something with our sightline, how we're seeing the pulsar," they came up empty-handed. The observations sat on a computer named Ganesh at the University of Vermont for ~7 years, until a bright-eyed, bushy-tailed, poofy-haired undergraduate came around. When Joanna proposed this project to me, her new hypothesis was that asteroids orbiting the star were causing these swooshes. I sat in my black leather desk chair, met her gaze, and said, "Asteroids around pulsars? Great!"

Upon further investigation, which involved looking through observation after observation of these two stars, we discovered that the swooshes were periodic and that there seemed to be patterns to them. On the left, you'll see a picture of some swooshes. The bottom axis (x-axis) shows the longitude on the star where the pulse is emitted from, and the side axis (y-axis) shows pulse number (in this case, 1000 pulses are plotted). We used a generalized version of Kepler's 3rd law, something taught in introductory astronomy courses fairly often, which related the period of an orbit (in this case, how often the swooshes happened) to the semi-major axis of an orbit (in this case, the distance from the pulsar to the "asteroid") and figured out that this "orbiting body" couldn't be an asteroid because the an asteroid wasn't dense enough to withstand the immense gravitational forces that whatever was orbiting it was experiencing. Therefore, it has to be something else. The density it has to be could have been that of a white dwarf! That would be crazy though, these companions around the stars would have to go around them in some of the fastest orbits ever! Is the white dwarf idea crazy? Yes. Could it be real? Possibly. We published the paper in the summer of 2016 and later got interviewed by New Scientist about the work later that summer. Since then, there have been quite a few papers on swooshing, from this one focusing on some unexpected swoosh behavior in B0919+06 to this one that says that swooshes are just a consequence of emission geometry.

This work was all done while I was an undergrad but I've continued my love of swooshes to this day. I put in a few Arecibo proposals my 2nd year of grad school to observe swooshes at high frequencies, but the project has unfortunately hit a roadblock due to the loss of the amazing telescope. I've been following swoosh literature and really hope someone uncovers the truth about swooshes soon!
Powered by